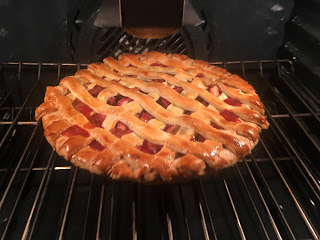 I always heard of rumors of a family “strawberry-rhubarb pie” that would float around in conversations from time to time, particularly around the summer time or around the holiday season while growing up as a kid. My mother refused to make it, claiming that her mother and aunt made it so much while she was growing up that it made her sick. Therefore, the strawberry-rhubarb pie rumors remained rumors.

I was craving a pie and ice cream terribly and had a couple of hours to kill so I decided to make the pie that I always wanted to try: the strawberry-rhubarb pie.

Sure, I have had strawberry tarts and rhubarb jam but never in combination with one another, and I always believed as a kid that making food with rhubarb was somehow too complex for me. Mind you, this was before I entered the food world as a professional.

I have no idea why my mother never gave in for one moment, because the minute I tried this pie, my heart, palette, and stomach sparkled with delight. I have never been a complete, dedicated fan of pie until I tried this one. The simple combination of sugar, cinnamon, strawberries, and rhubarb evolves into an addicting, sweet and tangy center of awesomeness.

And the addition of ice cream? I’m not sure if I have any words other than a milky, liquid gold.

If you have any secret recipes that your family has not tried, do yourself a favor and try them. You have no idea what you are missing, because just trying the undiscovered, strawberry-rhubarb pie just made me realize that there are family members that really do have a palette like mine.

If you want to try the pie yourself, try it here.
Email Post
Labels: Pie strawberry-rhubarb