A couple of friends of mine traveled to Wilmington back in October to visit a friend of ours who just had a baby. I had little knowledge of Wilmington other than the hit 1990’s TV show, “Dawson’s Creek” until we actually visited there.

Was I pleasantly surprised. It is a blossoming tourist town and actively growing by the minute. You can see new restaurant to shop open back to back as if it is a growth spurt that does not plan on slowing. It is certainly a culinary getaway if you are looking for some tasty seafood, beer, and ice cream.

We did not do much for being there less than 36 hours, but what we did get to do was pretty delectable. Unfortunately, I do not have all the details ( I was the driver and not the writer), but here is a sampling of my memory: 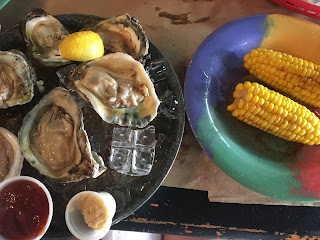 Ruben at Copper Penny: All I have to say is that this Ruben is close but not quite to the king of all Rubens in the south, the Cavalier in Lynchburg, VA. It was very tasty though and left me full for the afternoon.

Beer at Waterline Brewing Company: We were in the middle of their Oktoberfest and it was filled with fun, music and of course, beer. I had their Rye IPA which was quite nice.

Cocktails at The Blind Elephant: Historically known to be a 1920’s prohibition bar, that took its name to another direction other than the typical names at the time such as Blind Tiger for instance. They sold the Moscow Mules on Tap and I was definitely craving one in the heat. Overall, really refreshing and enjoyed the active atmosphere for a Saturday night in a small, tourist town. 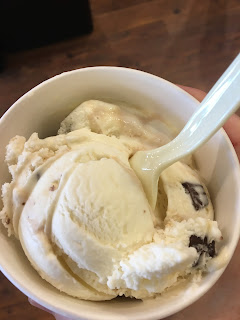 Oysters at Dock Street Oyster Bar: Best meal all weekend. I loved these Oysters which where basically local, straight off the shore. They had a wide range of vinegars so I kept mine simple with red wine vinegar and horseradish. The corn was also a great compliment to completely finish my lunch.

Ice Cream at Kilwin’s Chocolates: This was some of the best American ice cream I have tasted in a while. I went with the fan favorite, peanut butter cup despite my yearning for mint chocolate chip. The verdict? I could have had a full pint of it, but happy that I stuck with my small scoop. Otherwise I would have definitely spoiled my dinner.


Overall, you must travel to Wilmington. It is perfect for a weekend getaway or a longer trip up or down the southeast coast.
Email Post
Labels: Beer Cocktails Dock Street Oyster Bar Ice Cream Kilwin's Chocolates Oysters The Blind Elephant Waterline Brewing Company Wilmington