Summer of a Small Town: The Pulse of a Restaurant

I could not wait to write about this when I got home. Multiple projects kept me from actually being able to share this until now. 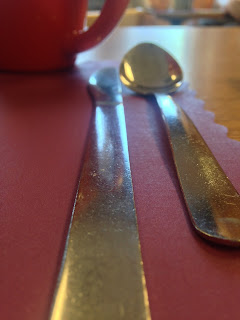 There was a Washington Post article published in recent weeks by Roberto Ferdman about how and why chefs are struggling to find staff who has the drive, heart and passion that goes into composing the culinary opera of today, and they are starting to get worried.The kind of staff that has a fire in their belly, wanting to live in the kitchen or die. The people that Anthony Bourdain, Marco Pierre White, and Bill Buford have written and reminisced about in books and TV shows. People itching for that drug induced high in the kitchen with a desire to hopefully be able to operate something of their own throughout their professional career.

I agree. How did this happen? The combination of the economy and the uber-produced, foodie media who has made it seem that you can be almost anyone as long as you are attractive in a kitchen has created a culture of people who think they can do this instantly. Let me tell you something pretty bluntly, because I have a fire of my own in my belly: it’s BS.

Julia Child was no Marilyn Monroe, let’s face it. Nor was she an Executive Chef of a five star restaurant. The kitchen was not meant to have beauty queens, especially ones who do not know what they are doing. Given, Julia did not live in a time where image was everything in America and she was classically trained, but her talent, love for the kitchen, and spirit alone made her surpass everyone in the industry, even if you were a master chef or not. My Life in France will convince you otherwise if you are still a little skeptic of what I am claiming.

Since we live in a world of ‘instaanything’, if culinary professionals do not see money and fame immediately, they will move onto something else to do professionally. Maybe it is the millennial culture we live in today. Maybe they are protecting themselves from another economic disaster. The long hours, little pay, and the odds that few really end up realistically “making it” in the world to be the next Thomas Keller of society are the main reasons and I cannot agree more.

Washington, DC has always been a pretty good dining scene in general. Up until the past 5 – 10 years, most people in the industry, back and front of house in this area have been somewhat more concerned with their higher education or their Capitol Hill connections as opposed to the more professional minded in New York, Chicago or San Francisco.

We have much improved since then, but regardless of location, I believe we are starting to find some places in the foodie cities where you have a hard time discovering the passion, will and effort it takes to compose the culinary performance that the food-obsessed love so dearly. Maybe I am wrong or too young to even make these claims. Regardless, I found something in New Jersey while visiting a friend that made my heart sparkle and thankfully reminded me that there are restaurants with a never ending, passionate pulse, both from the back and front of house.

I do not know any other aesthetic way to put this: You need to go to Shea’s Café & Bakery in Galloway, NJ. Shea’s is a popular breakfast spot in south New Jersey, just outside of Atlantic City that has been operating for 20 plus years in the area. By appearance, it gave me a Bill & Louise’s feel if you just so happen to be Georgia local. Collectible local memorabilia decorate throughout the interior, but not Applebee’s memorabilia, or shall I say ‘flair’. Mom and Pop memorabilia, the real stuff. The interior that speaks of where you actually are. Reminders that you are not far from New York City nor Philadelphia but also right next to the Atlantic Ocean in a small town setting. It’s a fascinating combination, and when I saw the crowds hovering the exterior as if I was at a popular Cracker Barrel, I knew this place is up to something. It either was going to be fat man’s paradise or something truly unique.

One thing is certain to make a restaurant team operate successfully: Your leadership has to care more than anything. They have to have the heart larger than of all of your staff and more in order to make it work. There is not enough of this I can emphasize at Shea’s. What I saw was what all of the books, magazines, TV shows and former bosses have told me about to find inspiration: Food and drink flowing like wine, working servers enjoying themselves with guests, and a management staff of all of one person who orchestrated a restaurant as if it was if it was own orchestra. 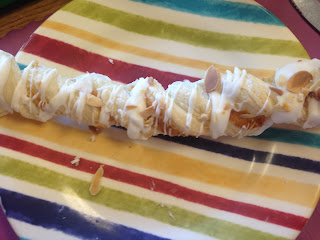 He just didn’t manage a restaurant. He entertained, operated, “and” managed, made it function in a way that operators have been dying to force into staff’s heads at every pre-shift. It was as if it was his home and a theater, and I literally mean a plush, reclining seat in front of his own kitchen. He was like the Godfather making sure all the family was taken care of. You walk in as a stranger and come out as a son. It was a sight to see. When I came in and requested a seat, he was entertained of the thought that I was alone visiting a good friend of mine. He thought I said “husband” rather than friend and so he jovially told me that my “husband” should stop whatever he is doing here and come join me now. Despite my embarrassment and reluctance of correcting him, I knew then I was up for a performance.

I got to sit not too far back near the kitchen but just enough where I could see everything that is going on from all sides of the restaurant which for me made me feel like a kid in a candy store. The more energy I fed from the guests to the staff to the atmosphere, the more I could not wait to try the food, because the aromas of pancakes, coffee and eggs simply made me starving.

I awed at the gargantuan sized dishes and I ended up ordering the pancakes, thinking they couldn’t be as big as the egg dishes. Was I wrong, and that was not the end of it. The manager finally realized that my “husband” was not coming so I think he felt entitled to offer me a homemade Italian pastry while I was waiting for my food. I knew then I was someplace eclectic. Not because he offered me a gift. He just happened to make the connection of what I enjoy eating (Italy and food for instance), and from that moment,  and it made it made my heart feel warm. 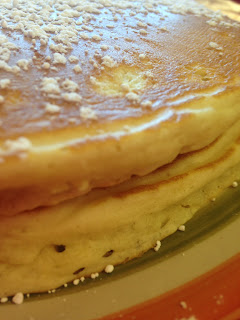 The pancakes. I almost have now words to describe them other than they firstly were largest pancakes I have ever seen. I could only eat half of them and even that was a stretch for myself. Think of pancakes literally as big as a round side coffee table. They were unlike anything I have ever had and literally of it’s meaning: pan cake. They were cakes that were cooked in a pan and I felt like I was eating cake from a pan: moist, light, the same texture as if you were eating a cupcake. I could not get over this crazed excitement. Maybe it was just fascination from not eating pancakes for breakfast on a regular basis, as I am a yogurt and muffin regular. Who knows, but it connected with my food-obsessed soul at this point and just allowed every bite to melt in my mouth as if it was cotton candy crafted from God. Someone knows what they are doing back there.

I knew I had to come back. I have to come back. The manager even told me so, and I have to bring my “husband” next time. Despite the banter, I was just so happy to find a restaurant that still has that pulse of people doing what they love to do and making a living out of it. It doesn’t have to be some washed up version of a food television show. It was what the people of that area know what to cook and how to cook it best for their customers. Restaurants like this are such exemplifying symbols of a community, big or small, no matter where you are in the world, and they will always last.

So next time, I am coming back. Maybe with my husband.