So, I have been cocktail crazed, and I cannot get the Daiquiri out of my mind. No, not the oversweetened, frozen concoction that hides in the freezer. I am talking about the simple cocktail originated in the early 1900's and considered one of Ernest Hemingway's favorite drinks.

Starting as a local drink in 1905 by American engineer, Jennings Cox in Cuba, the idea to use rum with lime juice and sugar started from supposedly running out of gin. American Navy officer, Admiral Lucius Johnson brought the recipe back to the States in 1909. The Daiquiri's popularity grew silently until Roosevelt's Good Neighbor Policy, where he opened relations with Latin America, the Caribbean and Cuba. From there, the rest is history.

Why am I am in love with it now? It is too simple to make: measure, shake and strain. No fuss with garnishes and extra additives. I think drinks at one point in time became too complicated, and that we are going back to using simpler ingredients with simpler methods. The Daiquiri is a perfect example of simplicity in a glass.

Pour over ice and shake. Strain into cocktail class. Traditionally no garnish. 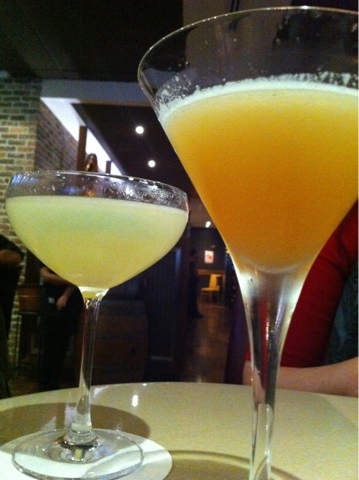