I finally got the craving out of my system. I returned from my old home feeling refreshed and more motivated to finish the project I started in Atlanta. I will say this: I never thought I could travel from Asia to Mexico in only 4 days but such is the life in New York I guess. I visited the old and new, and it felt like I never left. I hope that stays that way whenever I return again.

I thought I would be overwhelmed coming to New York. However, I was on such a high from being back in the great city that I did not even notice feeling anything. I felt under pressure from coming back. After catching up on all of my emails and noticed how many events are going on in the area, it made me feel like I need to be in the game, especially after visiting my former restaurant in New York.

One thing I am disappointed about is the fact I did not get to have a banh mi.

Out of all the things I could crave from New York, the only thing I really wanted to have at some point was a bagel with lox and cream cheese. I visited the ueberpopular but UWS local, Café Lalo. Even though it gained the label “touristy” since the filming of “You’ve Got Mail”, my sister and I always still visited it. They serve good coffee, mouth watering pastries, and an endless international brasserie menu. My favorite dish is the New York Breakfast: A freshly baked H & H plain bagel, cream cheese, choice of smoked lox, tomatoes, onions, capers, olives, mini gurkins with mixed greens all on one plate, surprisingly. Accompanied with a coffee and a piece of chocolate, who can resist? That is, if you are a bagel and lox lover.

This fascinating meal was a first discovery for me upon moving to New York four years ago, and most southerners I know never heard of it before. Here is a simplified version of one of my favorite breakfasts and give it a try with a coffee.

Toast bagel if you prefer. Spread cream cheese and layer to your preference. Enjoy! 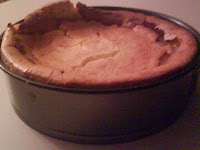 As promised, the following is the cheesecake recipe. I highly recommend doing this when you plan to stay at home most of the day. If done correctly, it is exactly what I you are looking for: genuine NY cheesecake.

Mix together crushed crackers, melted butter and 3 T sugar. Press into the base of a spring foam pan. 9 inches should be best.

Place into fridge for 30 minutes to set.

In large bowl: mix together remaining sugar and cornstarch. Beat in cream cheese, egg yolks, and vanilla by hand or electric mixer.

Slowly pour in both creams while beating constantly. Add salt and lemon zest.

Scoop onto the chilled cracker base from fridge. Bake for 1 - 1 ½ hours without opening the oven door until the cheesecake is golden brown on top. The cake will rise like a souffle.

Turn off the heat and let the cake stand in the oven for 2 more hours. The cake will then sink.

Take out the cake and let it stand for 1 hour. Place into fridge to chill thereafter.

Check out some of the area’s most worthwhile events to get my favorite season started!

World Beer Festival
When: Saturday, October 3
Where:Various locations in 2009 and 2010, but the next one is in Durham, NC.
What: Lots and lots of beer from around the world.
How Much:$40 General Admission, $75 VIP Admission
www.allaboutbeer.com/wbf/


Taste of Atlanta
When: Saturday and Sunday, October 10-11
Where: Technology Square in Midtown.
What: Atlanta’s most renown food festival of the year.
How Much: $25 in advance, $30 at the door.
www.tasteofatlanta.net


Hotoberfest
When: October 3
Where: Glenwood Park
What: A showdown of some of the industry’s most popular, inventive, and classic beers.
How Much:$30 General Admission, $50 VIP Admission
www.hotoberfest.net