The Weekly Menu Early Edition
Tomato Attack
I will be on a journey for the next few days so I give you a mini menu in the meantime. 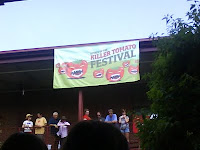 I never thought I would state this but kudos to the Atlanta dining industry. Over the past weekend I attended the Attack of the Killer Tomato Festival thanks to a friend of mine from work. It is a relatively young food festival presented by Georgia Organics, a non-profit organization specializing in the spread of local organic food. This year one of Atlanta’s newer restaurants, JCT Kitchen was lucky enough to hold the party. I had no idea what to expect, especially since I have never been to the majority of the participating restaurants. They simply did not exist while I lived here nor did much of a dining scene.

Over twenty Atlanta-based chefs and mixologists teamed up with local farmers to create tomato-inspired dishes and drinks along with music, dancing, and cocktail contests. Some farms had to spread the wealth to more than one chef, but that certainly did not get in the way of their culinary creativity. From tomato gazpacho to tomato burgers to tomato beer, this young gastronomic community showed no fear for experimentation. 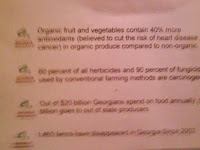 Over a Brooklyn Lager, I happily dove into every table I could get my hands on. I am sad to report, however I could not get some of my photos to work so I have no food photos. You can definitely catch other fans’ pictures through the internet in the meantime. Some notable picks :Joe Treux from Repast’s tomato composition with local heirlooms, tomato sorbet and whipped tomato parfait was my personal favorite, and little did I later discover that he won the competition. Even though his sampling was smaller compared to other chefs, the composition had such a versatile flow from tart to sweet flavors. I also enjoyed the frozen gazpacho push-up pops from Woodfire Grill. The tomato sliders with bacon salt and basil along with tomato beer from 5 Seasons Brewery tasted creatively simple, filling, and original.

As for the drinks, hands down to JCT Kitchen’s Ginger Was a Sweet Tomato. It was a smash. I do not think that table was vacant for one moment throughout my visit at the festival.

If there was any event to finally motivated me to explore the Atlanta restaurant scene, this festival did the trick. Not only was I amazed to see local produce perform its best for farmers and chefs alike, but I was pleasantly surprised to see very young but talented chefs restlessly eager to give Atlanta a name of its own and a culture to go with it in the culinary world. I must have not been paying attention somewhere along the way while I was growing up here. Or maybe I just forgot while I have been living elsewhere throughout the past eight years. In any case, thank goodness I came back for a second visit.

Next Stop: The Conch Republic!