Who is better than sex? Chocolate or vanilla? 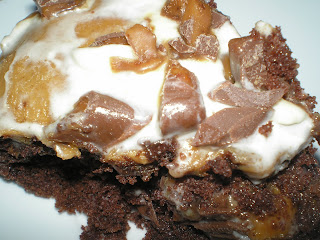 Better than sex. A phrase that generally more women than men like to refer to when eating food so delicious it turns us on. I, for one can think of many experiences where myself or my girlfriends used the term when feasting on food so savory it turns the hormones on full-blast.

I will admit that I genuinely do not mean the term when I use it, because let’s face it: anything is hard to compete with good sex. To be politically correct, I will catch myself and replace the phrase with a more PG-rated term such as “orgasmic” or “heavenly”.

One of my girlfriends and I decided to have lunch at a New American restaurant in the West Village on a late summer afternoon. When we slowly started to indulge in our desserts, my friend makes the infamous reference to her chocolate cake with vanilla ice cream which made me ask myself, ‘Isn’t there such as thing as Better Than Sex Cake?’ I remember glancing at it one or twice on the Internet when searching for recipes, but I realized that one cake must reign the title of “better than sex” somewhere out there. This question sparked my curiosity and I decided to perform a little research on it, hoping to find the cake that can truly compete with and win against sex.

Before researching on anything, I automatically assumed that chocolate had to be one of the main ingredients to this confectionery masterpiece. To my surprise, two general kinds of Better Than Sex Cake exist out in the world: one chocolate and one vanilla. I was slightly surprised, because I had a hard time accepting the fact that a vanilla cake could be a better aphrodisiac than chocolate. However, I began to believe otherwise as I read through recipes for the vanilla version.

I decided the only way to end this showdown between the two versions and settle this personal issue was to produce a taste test to see which Better Than Sex Cake could compete with sex and possibly win. I invited over some of my close buddies and many bottles of wine to help us figure out who could be better than sex: chocolate or vanilla?
Email Post
Labels: Better Than Sex Cake Chocolate dessert vanilla